I was thinking this morning about a "vertical file" kept at the newspaper office where I worked in college during summer vacation.  The editor, Hester Little Adams, filed everything from jr. high band concert programs to magazine articles about Mickey Mouse.  My colleague, Anne Shrock Ott, who worked full-time was the unfortunate mistress of the files during that time.  She reminded me this morning that "it was mind-numbing at 22."  And I replied to her, "And it was mind-numbing at 21."

So why now?  Why at age sixty-one-and-a-half am I mesmerized by the stories of my family? And why do I wish now that I had access to those files about my ancestors who lived in the community?

For one thing, I was brain-washed but in a good way.  When I was a small child, my grandmother LeNore Enz told me wonderful stories about her family.  One of her ancestors Christian Henry Creager encountered native Americans in NE Indiana.  Interviewed for Kaler's "History of Whitley County" (available on Google Books), Creager remembers encountering 150 native Americans on a return from Syracuse to Cleveland Township (South Whitley, Indiana).  Creager reports from  his childhood memories that he saw a native American man who had been killed by their tribe.  The body was buried vertically with only the head sticking out.  The native Americans placed the dead man's possessions around him and let the body decay.  The book notes that the head was taken by a man from Collamer, a tiny burg several miles from South Whitley.

Creager also recalls a time when his father Peter asked him to deliver some meat to his brother-in-law four miles away.  Creager said he was chased by a large pack of wolves, and his three dogs kept the wolves at bay.

It's obvious to me that my grandmother LeNore and I both got some of our hyperbole from Christian, who was LeNore's great grandfather.  He was among the first citizens of South Whitley, the town I grew where I lived as a child. But my grandmother put her interest into action, taping oral histories of elderly individuals from the county for the local library.

In the weeks since I've started my renewed push to research my ancestors, I've learned that my people were slaveholders.  I was certain that most of my family came from Europe in the mid 19th century, but I was missing a piece.  I did not have the correct spelling of my grandmother's family name, Hoard, prior to John Tyler Hoard's period.  It was changed from Hord, which opened up a new line and the reality that my ancestors owned other human beings.

Four hundred years ago this year, Africans were brought to this continent against their will, often changed in terrible situations in the bottom of slave ships.  This is  a legacy of which I'm not proud, yet one cannot stuff it into the back pages of a scrapbook.  This fact also tells the story of my family, of my country.

And my branch of the family left Virginia for Ohio and Indiana.  Many of them fought for the Union in the War Between the States.  This doesn't negate what my ancestors did. 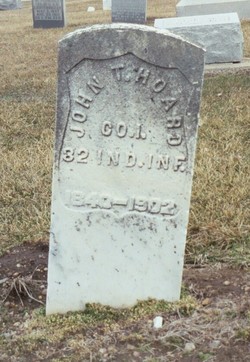 Note:  John Tyler Hoard was born on this date in 1840.  Private Hoard served honorably in an Ohio regiment during the Civil War, two stints in battles in West Virginia and Virginia, and was discharged due to a disability.  He later lived at the Old Soldier's Home in Marion, Indiana, but came home to Whitley County to die in 1902, and is buried at Old Cleveland Cemetery, South Whitley, Indiana.
Posted by Amy Abbott at 11:42 AM