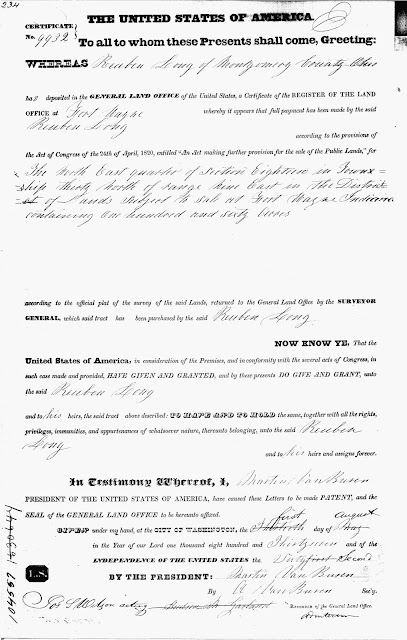 My mother is buried in a Lutheran Cemetery in the rural county where I grew up. Her parents are buried there, as are my grandmother’s parents. My great-grandmother’s parents and grandparents are buried there. Visiting the cemetery gives me an odd feeling, a feeling that I am walking among my history.
The first ancestor buried in the cemetery was Reuben Long. With his brother, Reuben first came to Washington Township, Whitley County, Indiana, from Culpeper, Virginia. The town was founded in 1759 and had been surveyed by a young George Washington who was a protégé of the founder, Lord Fairfax.
The Long brothers likely came to Whitley County before getting the land patent, so I don’t know the exact date. A Whitley County history book I own described the area of Washington Township, as wooded and rocky.
The land patent above, signed in the name of President Martin van Buren, gave the original acreage of what later would be known as Homeland Farm to Reuben Long. I have the original copy of this document, passed down through the generations. The farm was greatly expanded, primarily by my grandfather after 1936, and was sold by my family in 2010. Unfortunately, no one in my family wanted to farm the land.

Our legacy is, then, knowing the hard work and character of those who came before us to keep the "family business" intact for more than a century-and-a-half.