When reviewing old documents and photographs, I'm generally not emotional.  I'm not a cryer at all; it takes something huge to make the tears fall.  When I cry I generally have an asthma attack, so I guess I've trained myself not to cry.

The emotion of finding my great-grandfather's death certificate caused huge tears to well up in my eyes and pour out yesterday afternoon.

Henry Kellis Hoard was 62 when he died on December 2, 1932 after several days in Fort Wayne's Lutheran Hospital.  Kellis, the name he used, was named for his grandfather, a physician in Coshoction County, Ohio.  I'm still researching from here that Kellis (Hoard) Hord originated.

As the story goes, my great-grandfather went to the Tunker Store as he often did, and drank something he mistook for cider.  He was not a drinker, and he was not senile.  We don't really know what happened.  He drank sulphuric acid.

Seeing it written on the death certificate was a bone-crusher, because my grandmother, about whom I'm writing the book, adored her father.  She was his baby, the last of three daughters, and she followed him everywhere.

The prior year, my grandmother married my grandfather on April 31, 1931, and moved to Springfield, Illinois, where Granpy's job with Prudential took him.  My mom was born on March 28, 1932.  I know that her Grandpa Hoard saw her several times, including her baptism day at Homeland Farm.  Mom was a baby, and has no memory of him.

My grandmother had many tragedies in her early life, and I can imagine losing her father when she was only 24 was difficult for her.  She also lived in the same house until 1973, and kept a meat locker at the Tunker Store, and shopped there for incidentals. My brother, cousins, and I were customers of the Penny Candy section and walked or rode our bikes down to the corner to the store.  It never occured to me until yesterday that this store must have been a place of horror for her.

This is an undated article I found among my grandmother's papers, but based on the age of an ancestor mentioned, this article ran in the paper in 1930.  My great-great-grandfather Washington Long died in the same year. 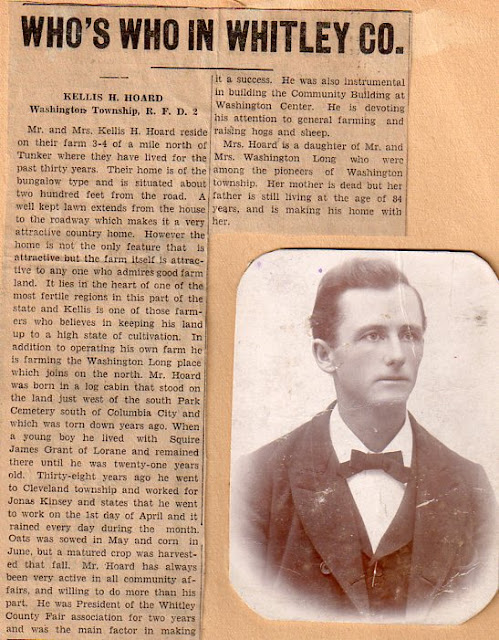